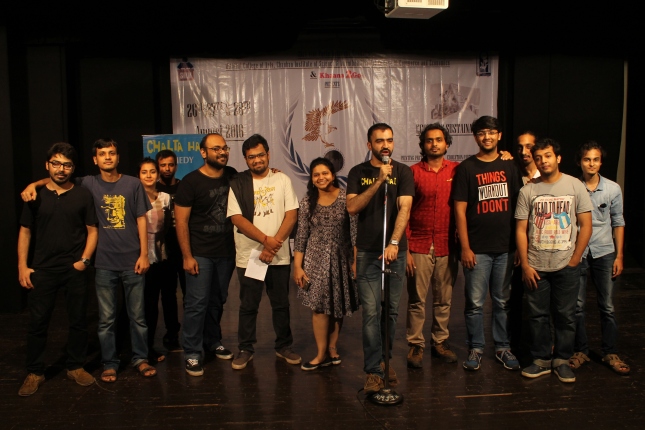 Stand up Comedian, what it means to the public and the person who is entertainment for the public. I as a journalist, I would say, such comedians have freedom of speech, they delivery humor using different sentence constructions and the person delivering also has to keep in mind about the slurs he use, as others might be offended.

In an institute like Hmmra, the directors not only ask their dear students to focus of studies, it is a college where a student can relax and enjoy a moment of fun. Here, they host different kinds of shows; one of them was the standup comedian.

The comedian’s name is Masoom Rajwani  and way he was humoring the fellow students was outstanding. He first started with the language barrier, where he gave an example that, one cannot ask a girl out for dinner using Hindi words, because it looks odd/weird. He also was talking about the use of social media, and how it has escalated, which in some ways humor’s the people. Hey, I want to comment on some actress’s picture, of course I would write something really special, thinking some mythical forces will tell that actress to reply me back. Which is again a fantasy, but some people just cross the limit of trolling themselves. Piyush Sharma was so hilarious, and so present minded person, that he was were thorough about what he was speaking. That made him a very selective candidate for the stand up comedy for the students to take a break from the books.

There are so many other stand up comedians, with more and more hilarious examples. Trust me, those are the people who can actually make you laugh so hard, for the moment you just forget any problems going in the life. Stand up comedy isn’t just a way of relaxing, it sometimes helps people know, what is actually happening in the world and at what levels people are making fool of themselves. Reza Noorani gave pretty good examples of such kinds, and I really came to know such people on social media exist.

I would even suggest other people, to see such comedy shows or hear a standup comedian, when one can find time. Even if one cannot find, I would request to take a break.