As a student of journalism, one thing I find particularly testing is to stand in front of a camera. On the face of it, one would wonder what all the fuss is about. However, there is more to it than what meets the eye. Broadcasting, for me, transcends mere news reporting. Today’s times warrant drama. There is so much more that is, or can, be conveyed on camera. Your eyes, body language, voice modulation, confidence, and alertness, have the potential to leverage a news story. The crux is that it all has to come together in that one moment.

At Harkisan Mehta Institute of Media Research and Analysis, we have regular sessions of practicing reporting on lens. Interviewing people and speaking in front of an audience is an ongoing process. However, operating in a simulated environment, where we have the luxury of time, is a far cry from the pressures of the real world.

Keeping that in mind, on April 29, 2016, our college organised a special session for us. A visit to the prestigious Aaj Tak office/studio. Amongst Hindi news broadcasting channels in India, Aaj Tak is arguably the biggest. Be it excellence in news reporting, or viewership, it is hard to name a channel that can trump it.

All of us, along with our faculty member, Mrs Sonika Tewari, assembled outside the Aaj Tak office in Andheri, East, sharp at 1 pm. Once inside, we were greeted by an amicable man, Mr Manish Shirishkar, their Head Director of Photography, Mumbai.

Straight away, we were guided into the recording studio. Standing at the centre, with a huge green screen in the backdrop, multiple cameras staring, along with blinding lights, was a real eye-opener. It felt like stepping into a Test match arena after having played gully cricket all our lives!

We then shifted our base to the Picture Control Room, a place where there are multiple screens, along with a director who synchronises the frames being shot inside the studio. The next hour or so was truly captivating. In the recording studio now, popular entertainment show Saas Bahu Aur Betiyaan was being shot. As it was International Dance Day, a special programme was planned. Both the anchors, dressed in traditional attire, were performing Spanish dance forms as an opening act. “These days we look at dancing as a prerequisite while hiring anchors,” said Manish nonchalantly.

It was about 1.30 pm at that time and the show was to air at 2.30 pm. The shoot was a race against time. Having read the script just once, and with the clock ticking away, it was fascinating to watch the anchors as they put on an act. Witnessing their presence, clarity of thought, flawless diction, spontaneity, and showmanship, was a massive learning for all of us. 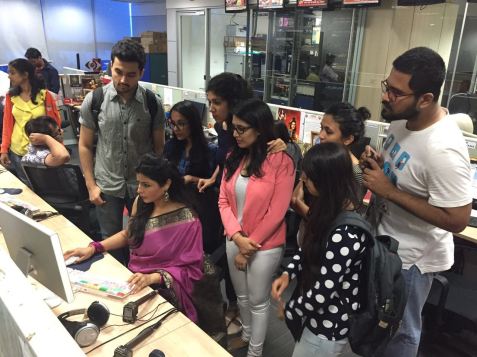 Later, we were given a masterclass on how to record a voice-over. The entire meaning of a story can be lost if not spoken in the correct tone. Only after hearing the recording in person did we understand the extent to which our voice needs to be modulated. Hearing the anchor pour so much emotion into words was stirring.

What followed was an interactive session with Manish. He shared with us anecdotes of his wonderful journey with Aaj Tak. He had joined the channel in 1998, when it was hardly the name it is today. He threw light on his struggles, on how he made his way up from the very bottom. Manish’s passion for his craft struck a chord with each one of us. We were motivated to face the grind that lay ahead.

At the end of it all, I can say for sure that our visit to Aaj Tak was an enriching experience. It gave us a first-hand lesson of what it takes to be a top professional. Personally, I know that the visit will hold me in good stead in the future. Hopefully, I’ll do a much better job the next time that lens zooms in on me.